Henry Haynes and The Great Escape is a fun black and white illustrated story for ages 6-8 about a boy who falls inside his library book and gets caught up in a zoo escape that’s been masterminded by Gordon, a rather smelly gorilla…! 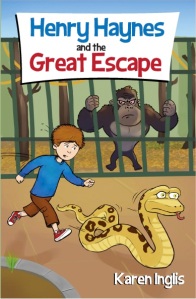 It’s a fun, fast-paced page-turner with short chapters, aimed at early readers from age 6 as well as slighter older ones looking for a quick and entertaining read.

Here’s the all-important back cover blurb 🙂

Fun and fast-paced for ages 6-8

Once again I worked with my Bosnian illustrator, Damir Kundalic, who pulled out all the stops to come up with the fun illustrations of Brian, the bossy boa constrictor who’s been put in charge of the escape, as well as Gordon and all the other animals in the story.  Here are a couple of taster illustrations 🙂

Debbie is an avid reader and, amongst her many roles, has worked with a leading children’s reading charity Readathon. You can read Debbie’s review of Henry Haynes and The Great Escape here.

Where to buy Henry Haynes and The Great Escape

You can order Henry Haynes from most online bookstores – and from most UK/US and Australian bricks and mortar bookshops. The links below offer just a few examples of where to find it online.

It’s also stocked by selected branches of Waterstones in southwest London and in local independent bookshops such as The Barnes Bookshop SW13, The Sheen Bookshop SW14, and Wimbledon Books SW19 .

During the summer term of 2014, soon after its launch, I took Henry Haynes into three schools and for a book signing in Wimbledon Books. Here’s my blog post about how things went >> Henry Haynes and the Great Escape gets off to a flying start 🙂